Four years ago I would have laughed had anyone said I would...

Four years ago I would have laughed had anyone said I would be a student of Christian Science and a member of The Mother Church, and of a branch church devoting several hours a day to the study of the Lesson-Sermon and the Christian Science periodicals. In the first place, I wouldn't have known what Christian Science was, other than a religious group "that doesn't believe in doctors or material medicine." In the second place, I was pretty sure there was no need for religion in my life—that was for people who needed a crutch.

But that was all to change. My husband and I were into our third year of marriage when the pains of sense caught up with its pleasures. One thing led to another, until we found ourselves separated and on the verge of divorce. 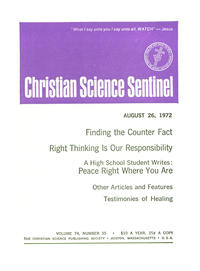