Should We Conciliate Society?

Some critics of Christian Science believe that the demands of this Science are too radical spiritually, that in order to attract people and make it popular, Science should compromise with worldly standards. They would like to bring the truth down to the level of this materialistic era instead of turning thought to the ideals set by Christ Jesus. "Don't change our customs," these critics say, "but soften the demand of Science that we forsake material interests and drugs and sensual pleasures."

Jesus had similar critics. At one time when the scribes and Pharisees argued with him about the difference between their old social and religious customs and his new ones, he gave them this parable to think about: "No man putteth new wine into old bottles; else the new wine will burst the bottles, and be spilled, and the bottles shall perish." Luke 5:37;

Send a comment to the editors
NEXT IN THIS ISSUE
Editorial
Are We Willing to Change? 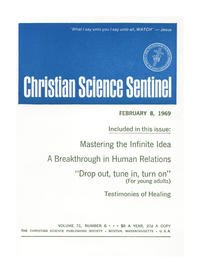