During my tour of duty in the service in World War II, I...

During my tour of duty in the service in World War II, I developed some undesirable traits of character and habits, including drinking of alcoholic beverages and smoking. One morning about three o'clock I was awakened by alarming symptoms, and I lapsed into unconsciousness and then into convulsions. I was taken to the dispensary, where the doctor told me I had liver trouble.

This problem persisted for about twenty years after I left the service and would reappear in the form of convulsions at least every nine months. The illness would come without warning, sometimes while I was driving my car, or while I was on high scaffolding, where my business often required me to be. The condition became so serious that I lost the privilege of driving my car, which was much needed in my business. My income practically stopped, my business fell off, and in a short time my home was broken up.

Send a comment to the editors
NEXT IN THIS ISSUE
Testimony of Healing
Early in my study of Christian Science I learned that, if I... 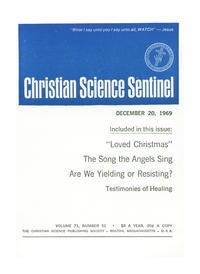