The above is an abbreviated, postproduction text of the program released for broadcast the week of June 7–13 in the radio series, "The Bible Speaks to You." Heard internationally over more than 1,000 stations, the weekly programs are prepared and produced by the Christian Science Committee on Publication, 107 Falmouth Street, Boston, Massachusetts, U.S.A. 02115.]

RADIO PROGRAM NO. 323 - Where Does Good Government Start?

Announcer: We hear a good deal about government, especially at the time elections are pending. Everybody wants good government, but many people feel helpless to do anything about it. 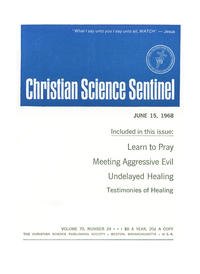