This testimony may be of benefit to someone who knows of...

This testimony may be of benefit to someone who knows of the writings of Mrs. Eddy but who still seeks persuasion before accepting the truth they contain.

Science and Health, translated into my native German language, was given to me almost half a century ago by a friend who felt my need. The literary style of the book greatly interested me, but I was not convinced of its healing message. Not until many years later did the words "Christian Science" become meaningful. I had then acquired the smoking habit and was full of self-condemnation for being in bondage to it One day I came face to face with Christian Science literature distribution box. An article in a Sentinel therein carried the message, "cease struggling." The very words planted in me the determination to become an earnest student of Mrs. Eddy's writings. 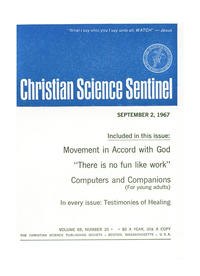