"That wicked one toucheth him not"

Through the study and application of Christian Science one may understand that God is the only creator and that His creation is wholly good. He may learn that evil, the opposite of God, is not included in God's creation and hence is literally unreal. This religion illumines one's view of oneself, one's fellowmen, and one's environment with the light of Truth and Love and reveals the spiritual reality of being, wherein God is All-in-all and man is God's idea or reflection.

Christ Jesus understood that God's goodness is the only true presence and power. The Master referred to evil as "the wicked one." Matt. 13:19; and he also defined it in these words: "He was a murderer from the beginning, and abode not in the truth, because there is no truth in him. When he speaketh a lie, he speaketh of his own: for lie is a liar, and the father of it."  John 8:44; 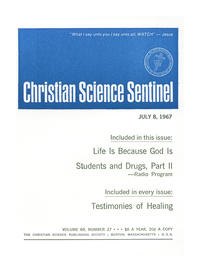