Although I had attended a Christian Science Sunday School for...

Although I had attended a Christian Science Sunday School for several years and knew beyond a doubt that Christian Science heals, it wasn't until I entered the armed services that I discovered this religion to be the way of Life, meeting every human need. While in Officer Training School, I didn't adjust properly to one specific aspect, that of taking orders. One day my military training officer ordered me to do something that at the time I didn't feel was correct, and I refused by remaining disobediently silent. A great stir resulted, and I was put on probation, with the strong possibility of not being commissioned.

I had started attending the Christian Science meetings on base, mainly to get away from the barracks rather than because I felt I wanted or needed Christian Science. However, the Chaplain on the base and his wife, who were Christian Scientists, had already secured my trust and respect, and without knowing why, I took my problem to them. It was explained that stubborn and disobedient qualities do not come from God and cannot be man's. I had much false pride that needed uncovering and healing, and much of the help the Chaplain gave me had to be through silent, prayerful work on his part because at that time I was still unteachable in many areas, owing to lack of humility.

Send a comment to the editors
NEXT IN THIS ISSUE
Testimony of Healing
For over forty years now I have been receiving the benefits of... 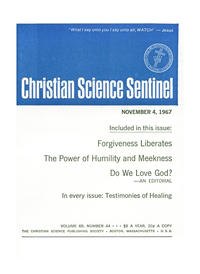