The Fighting Man's Conscience and Duty

The prospect of going into actual combat is often deeply disturbing to the serviceman, not necessarily because of its challenge to his physical courage but because of the conflict it causes between his conscience and his patriotic obligation. This conflict sometimes evokes perplexing questions, such as: How can one pray for victory in battle while knowing the cost this would inflict upon other human beings? How can one shoulder arms, intent upon using them to harm another, and yet pray that he be spared injury himself? How can one take the life of another and somehow justify the act as a Christian deed? These questions are searching, and they deserve forthright answers.

In March, 1898, Mrs. Eddy was asked her views on the momentous question which preoccupied the American people at that time. She wrote to the Boston Herald: "In reply to your question, 'Should difficulties between the United States and Spain be settled peacefully by statesmanship and diplomacy, in a way honorable and satisfactory to both nations?' I will say I can see no other way of settling difficulties between individuals and nations than by means of their wholesome tribunals, equitable laws, and sound, well-kept treaties." The First Church of Christ, Scientist, and Miscellany, p. 277; 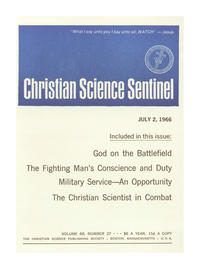