In the Bible a serpent metaphorically denotes evil. The children of Israel, during their experiences in the wilderness, felt the sting of fiery serpents; they felt the plagues of evil belief, which claimed limitation of water, food, health, and home. In Revelation the serpent is spoken of as the devil; it typifies mortal mind, poisoned with enmity, vaunting a power capable of breaking the Ten Commandments.

In Science and Health. Mrs. Eddy gives a definition of "serpent," which includes these statements (p. 594): "The first claim that there is an opposite of Spirit, or good, termed matter, or evil; the first delusion that error exists as fact; the first claim that sin, sickness, and death are the realities of life. The first audible claim that God was not omnipotent and that there was another power, named evil, which was as real and eternal as God, good."

Send a comment to the editors
NEXT IN THIS ISSUE
Article
"Who did hinder you...?" 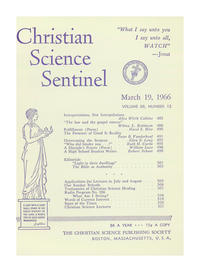