The Possibilities of Intelligence

Intelligence is generally considered a private possession, sometimes inherited, sometimes cultivated through education and use, but always dependent upon the brain for normality. Intelligence has been described by mankind as the mental function of comprehending connections, as the cognition that accumulates knowledge, and as the ability to use proper means for accomplishing objectives. The word implies mental acuteness, the ability to reason, and the capacity to grasp facts and judge values.

Christian Science lifts the meaning of intelligence to great heights. It rejects the assumption that intelligence is a private possession or that it is dependent upon brain and declares it to be an attribute of God, apart from matter, which man, God's incorporeal image, reflects. According to Science, intelligence is not broken into bits but is indivisible and infinite. Its possibilities are available to everyone through the demonstration of the truth that man is God's likeness. 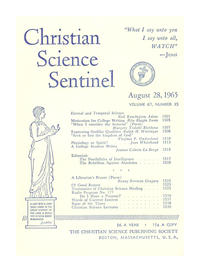