The meeting opened with the singing of Hymn No. 299, the words of which are by our Leader, Mary Baker Eddy. The chairman, James Watt, of Washington, District of Columbia, read selections from the Bible and from the writings of Mrs. Eddy. Silent prayer was followed by the audible repetition of the Lord's Prayer. Letters of greeting from The Christian Science Board of Directors and the Board of Trustees of The Christian Science Publishing Society were read by the chairman. 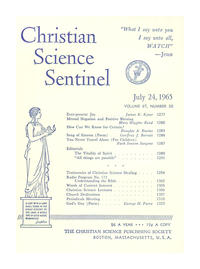