Man Is Spiritual, Not Material

Regarding these two concepts of man, the Apostle Paul says (Eph. 4:22-24), "Put off concerning the former conversation the old man, which is corrupt according to the deceitful lusts; and be renewed in the spirit of your mind; and ... put on the new man, which after God is created in righteousness and true holiness." And on page 300 of Science and Health, Mrs. Eddy tells us, "So far as the scientific statement as to man is understood, it can be proved and will bring to light the true reflection of God—the real man, or the new man (as St. Paul has it)." 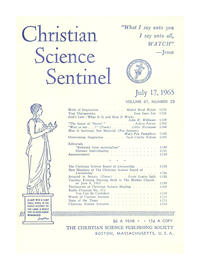