About six years ago my outlook...

About six years ago my outlook on life and people had become so filled with hate, malice, and bitterness that I was losing weight and was unable to sleep at night. I decided the only way out was to commit suicide. This decision had been given much deliberation.

Final plans were being made when one night there came to me quite clearly a thought to the effect of these words of Mrs. Eddy's from page 291 of Science andHealth: "As death findeth mortal man, so shall he be after death, until probation and growth shall effect the needed change."

Send a comment to the editors
NEXT IN THIS ISSUE
Testimony of Healing
I became interested in Christian Science... 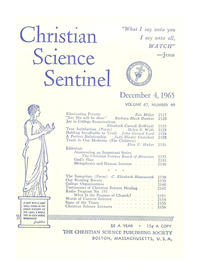