About two years ago, several...

About two years ago, several factors arose in my business that pointed to the need for a new look at what the future held in store. The possibility of a change in employment was considered. I gave a great deal of thought to testimonies related by Christian Scientists about their handling of similar situations. From them I learned the importance of praying, "Not my will, but thine, be done" (Luke 22:42).

It became my firm conviction that by applying the Christ, Truth, to this unfoldment, I too would be led to do the right thing at the right time, all under God's direction and in accord with His infinite plan. Then when the moment came for a decision, I would know that the time had come and how to decide so clearly that nothing could be clearer.

Send a comment to the editors
NEXT IN THIS ISSUE
Testimony of Healing
I should like to express my profound... 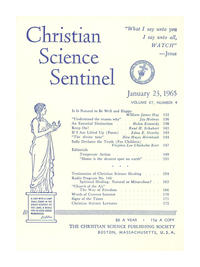