The greatest adventure of all is living the Science of Christianity—proving Christian Science. It reveals grander views than could ever be seen from the soaring eagle's mountain home. It is thrilling beyond all mortal sense, but it does not lead through hazardous paths as it ultimately reaches the goal of perfection demonstrated.

On this exalted adventure, God unfolds to us His infinite spiritual creation, in which man is held in perfect loveliness as His image and likeness and in which the illusion of matter is unknown because it does not exist. 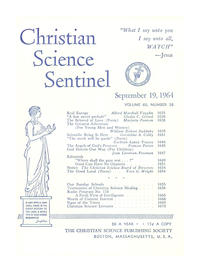