The Greek term translated "ward" is phylake, which, although used in various senses, means primarily guardianship or guard in an abstract sense, and hence a guard of soldiers. From the account of Peter's escape, it is possible to assume that he escaped not only from the personal guard of four men assigned to him at all times (see verse 4), but also from others detailed to guard the prisoners at two strategic points on the way to the "iron gate that leadeth unto the city" (verse 10).

Send a comment to the editors
NEXT IN THIS ISSUE
Testimony of Healing
When our daughter was two... 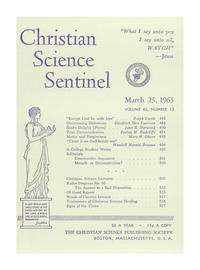