Our Textbook Acquaints Its Readers with God

Our textbook is the subject of an interesting comment by our Leader, Mary Baker Eddy, in "The First Church of Christ, Scientist, and Miscellany" (p. 239): "The Science of the Scriptures coexists with God; and 'Science and Health with Key to the Scriptures' relegates Christianity to its primitive proof, wherein Principle, revelation, the divine Principle, rules, and practice of Christianity acquaint the student with God. In the ratio that Christian Science is studied and understood, mankind will, as aforetime, imbibe the spirit and prove the practicality, validity, and redemptive power of Christianity by healing all manner of disease, by overcoming sin and death."

A church member in Mexico writes that he was asked by a friend to call on his wife who was bedridden and suffering from blood coagulation in her legs. He took with him a copy of the Bible and of Science and Health by Mrs. Eddy. Vital truths of Christian Science were explained to the woman, and certain passages in the books were pointed out. He left the books and a copy of the Christian Science Quarterly with her, so that she could begin studying the Lesson-Sermons outlined in the Quarterly. In a few days she was up and around, and the difficulty completely disappeared in less than a month. Neighbors learned of the healing, attested to by the wife, and as a result five persons purchased copies of the Bible and Science and Health within a few months. 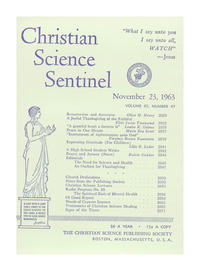