Christian Science was presented to me over twenty-five years ago when I was suffering from painful hemorrhoids. After physical treatment and much medication the condition was not healed, and I was facing an operation when a sister of mine who lived in another state and who was a student of Christian Science wrote and asked me if I would be willing to try her religion. I knew very little of it and did not really believe that it could heal me, but in my extremity I consented to try it.

At my request, this sister got in touch with a practitioner in her city and asked her to give me treatment. I was asked not to use any more medicine. My first thought was that I could not possibly get through the day's work without the medicine, but I was obedient and went to work without it. My work at that time required much standing and walking, and I was simply amazed this day when I found that I was able to stand and walk without any trace of pain or discomfort. This continued to be true in the days that followed. The pain had ceased, but the hemorrhoids were still in evidence.

Send a comment to the editors
NEXT IN THIS ISSUE
Testimony of Healing
I have always been glad that I... 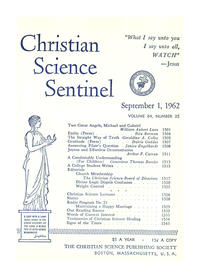