Several years ago I went to a...

Several years ago I went to a doctor and was told that I had cataracts on my eyes. I became, very much discouraged, because my work as a bookkeeper required a lot of close work. I went to see a good friend of mine who has been a Christian Scientist for years, and she recommended that I begin to study Science; so I did. I secured a copy of Science and Health by Mrs. Eddy and of the Quarterly, in which is outlined a weekly Bible Lesson, which I studied every day. I also started attending a branch Church of Christ, Scientist, regularly.

I began going to a practitioner, but I still had an appointment to see a doctor at a later date. This appointment was canceled, however, and I have not been to a doctor since. With the help, through prayer, of this kind practitioner, I received my healing in fifteen days and have had no trouble with my eyes since that time. 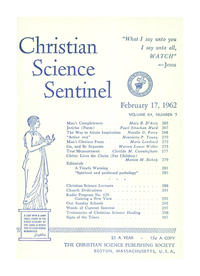