As a girl of nine I was ill with caires in the bones of my legs and had to spend nearly a year in a hospital. I had four operations, but there was no improvement. Then one day my mother was telephoned to and was asked to give her permission for the amputation of one leg. The doctors were of the opinion that I would never be able to use it again. Neither my mother nor I was a Christian Scientist, but she had been praying for me for nights on end. She arrived at the hospital an hour after receiving the telephone call and wanted to take me home.

Over a dozen doctors and nurses tried to dissuade her, but Mother stood her ground in front of them, battling to save my leg. After long discussions, we were at last released, but under the threat of my never being allowed back there, however bad my legs might be. The doctors were convinced that even if my legs did get better then, the disease would break out again after a couple of years. After I returned home, my legs did get better.

Send a comment to the editors
NEXT IN THIS ISSUE
Testimony of Healing
Many years ago, through my... 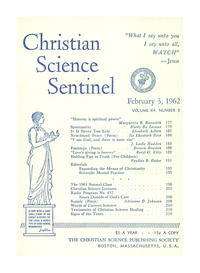