Christian Science came to me like a great light at a time of mental darkness thirteen years ago. Although I believed myself to be agnostic, my thought was prepared for the acceptance of Truth. In a state of general despondency over my own and world affairs, I reasoned that if what Jesus had said was true, then the Comforter he promised was surely in the world now, since the need for it appeared so great.

I also remember wondering whether God had created a world wherein it seemed all my time and energy must be given to the physical care of four children, who were often ill, so that there appeared to be no time or opportunity to meet their higher needs. In addition, I was experiencing at this time so great a sense of physical and mental fatigue that it was often nearly impossible for me to perform the smallest tasks.

Send a comment to the editors
NEXT IN THIS ISSUE
Testimony of Healing
I felt the presence of the Christ,... 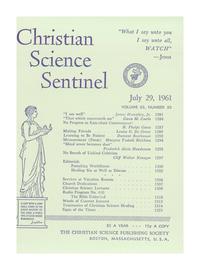