The early Christians observed the ancient Hebrew Passover, though in a new spirit. Gradually the Passover became the Christian Easter, which commemorates Jesus' resurrection. Special observance of Easter first became general in the United States during the Civil War when Easter's message of the triumph of life over death was seen as bringing consolation to those bereaved.

In some remarks about Christ, Truth, made at the Easter season, Mrs. Eddy said (Miscellaneous Writings, pp. 179, 180), "In 1866, when God revealed to me this risen Christ, this Life that knows no death, that saith, 'Because he lives, I live,' I awoke from the dream of Spirit in the flesh so far as to take the side of Spirit, and strive to cease my warfare." 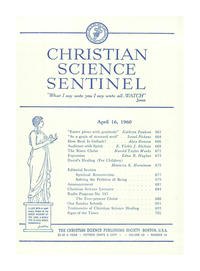