In the Christian Science textbook, "Science and Health with Key to the Scriptures," Mary Baker Eddy declares (p. 515), "Man is the family name for all ideas,—the sons and daughters of God." Every individual idea belongs to the great family of which God, divine Mind, is the Father-Mother, and man is the offspring, the full expression. Generically considered, man is the compound of all ideas, made up of ideas and of nothing else.

The textbook describes man as individual consciousness, characterized by Deity as idea. Individually considered, man is then composed of right ideas, all of which are of the genus man. Now "consciousness" may be defined as a state of knowing. And since the only creation of real Mind is idea, all true knowledge must be consciousness of ideas. It follows that individual consciousness, or man, can know only the components of himself. All true knowledge is self-knowledge. Reflection is descriptive of man in Christian Science, for the very word "reflection" has the same root as the verb "to reflect," one meaning of which is "to think seriously," that is, to contemplate. We commonly say, "I reflected," and speak of thought as reflection.

Send a comment to the editors
NEXT IN THIS ISSUE
Article
WHAT CONSTITUTES TRUE HUMILITY? 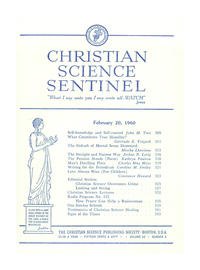