About thirty years ago a very...

About thirty years ago a very dear friend who was a Christian Scientist was instrumental in healing our year-old son of an ear condition which had necessitated the lancing of one ear or the other at least once a month since birth. At the time I had never heard of Christian Science, but "man's extremity" surely proved to be "God's opportunity."

This friend, who lived upstairs, had learned to love our son dearly in the three or four months she had known him, and one day after the doctor had been to the house and had taken care of the boy, she told me something of the healing power of Christian Science and asked that she be allowed to work for him if he should again need help.

Send a comment to the editors
NEXT IN THIS ISSUE
Testimony of Healing
Some time ago my affairs were... 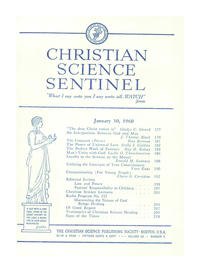