Having read many wonderful...

Having read many wonderful and inspiring testimonies in our Christian Science periodicals and having been helped by them, I am happy to add my testimony of the healing power of the Christ, Truth. My experience has proved, as have experiences of so many others, that "man's extremity is God's opportunity."

In June, 1950, I graduated from pharmacy school. One year later, while I was returning home from a business banquet, a chronic back ailment, which had troubled me from the time I had sustained an injury while playing football in high school, recurred. I called a friend who is a physician, and he advised me to meet him at the hospital. While waiting for him there, I met another physician, who, seeing my obvious distress, administered a local anesthetic, but it gave me no relief. Later the doctor whom I had called administered as much of the anesthetic as it was believed the human system could take, but again it was without effect.

Send a comment to the editors
NEXT IN THIS ISSUE
Testimony of Healing
For the many blessings that have... 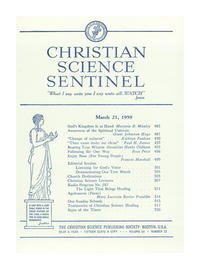