"Wilt thou be made whole?"

[The following Christian Science program of the above title was presented on Sunday, March 1, over the Columbia Broadcasting System "Church of the Air." The speaker was John J. Selover.]

"Wilt thou be made whole?" Early in his ministry this question was addressed by Christ Jesus to one of a multitude of ailing folks at Jerusalem. In the Bible, John relates the account in these words (5:2-9, 14):

"There is at Jerusalem by the sheep market a pool, which is called in the Hebrew tongue Bethesda, having five porches. In these lay a great multitude of impotent folk, of blind, halt, withered, waiting for the moving of the water. For an angel went down at a certain season into the pool, and troubled the water: whosoever then first after the troubling of the water stepped in was made whole of whatsoever disease he had. And a certain man was there, which had an infirmity thirty and eight years. When Jesus saw him lie, and knew that he had been now a long time in that case, he saith unto him. Wilt thou be made whole?

Send a comment to the editors
NEXT IN THIS ISSUE
Testimony of Healing
In "Science and Health with Key to the Scriptures,"... 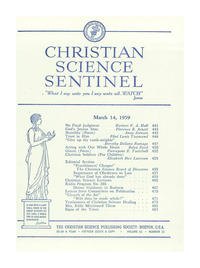