Moses was so aware of God's presence that he was able to translate to human consciousness what God's will is for all. He received directions from divine Mind, God, and he obeyed them.

At God's command he came out of the land of Midian to free the Israelites from bondage in Egypt. He was repeatedly constrained by God to go to Pharaoh and demand liberty for the enslaved people. Each time he obeyed. But each time Pharaoh refused to free them. There was no wavering in God's command or in Moses' delivery of the message, which demanded (Ex. 8:20), "Thus saith the Lord, Let my people go, that they may serve me." Finally, after a series of troublesome events brought on by Pharaoh's failure to let the people go, he was forced to release them. 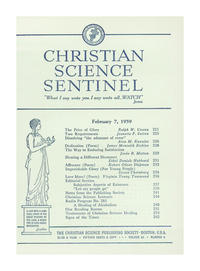