In the physical realm there appear to be many evidences that men are subject to laws of matter, laws over which they have no control. Sin, disease, and death, for example, present strong arguments for their reality by following patterns of behavior laid out by general mortal thought, claiming all the while to be the result of some law of matter disobeyed or broken.

To the student of Christian Science, however, laws of matter are not God's laws, and he chooses to follow the latter. Emphasis is given to this point by Mary Baker Eddy, for in "Science and Health with Key to the Scriptures" she writes (p. 182): "Mind's government of the body must supersede the so-called laws of matter. Obedience to material law prevents full obedience to spiritual law,—the law which overcomes material conditions and puts matter under the feet of Mind." 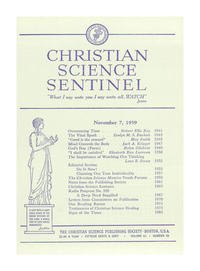