[Following is substantially the text of the program of the above title released for broadcast the week end of September 25-27 in the radio series, "How Christian Science Heals," heard internationally over approximately 800 stations. This is one of the weekly programs produced by the Christian Science Committee on Publication, 107 Falmouth Street, Boston 15, Massachusetts.]

Speaker: Our guests today are Mr. and Mrs. Paul Nelson, of Muskegon, Michigan. At one time it seemed as though sickness and discord might bring disaster to their home. But right then they made a discovery. They found the truth which Christ Jesus said would make men free. So they set to work to gain an understanding of this truth. It's been blessing their home ever since. We're going to let the Nelsons tell you their experience.

Mrs. Nelson: I'd had a lot of medical treatment for a very serious organic condition, but the trouble grew worse. Finally I was told that certain organs would have to be removed. Even then, there was no assurance I'd be any better. But before the doctors would operate, they insisted on special treatment to clear up an infection. This treatment seemed to aggravate the condition; and one night my body became very swollen, and I had a high fever. Toward morning, I was so ill that it really seemed the end was near. Our doctor said there was nothing more that he could do. My husband came into the room, and my sister was there. They stood there and looked at me. They didn't know what to do for me. They just didn't know where to turn next. 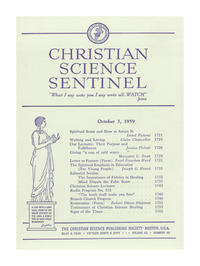