IN THE NAME OF THE CHRIST

When a police officer gives an order "in the name of the law," he speaks with authority. He knows that he has the full power of the law behind him to help him enforce his command.

When the writer began a conscientious study of the Bible and of "Science and Health with Key to the Scriptures" by Mary Baker Eddy, she found it interesting to note how closely the just, human law patterns the divine. When Christ Jesus rebuked error, he too spoke with authority, with the authority of his Father. Jesus said that he of himself could do nothing, that it was the Father dwelling in him who did the works. 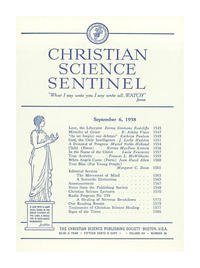