HEARING THE WORD AND DOING IT

When Cornelius, the centurion, was directed to send for the Apostle Peter and to listen to whatever message he might bring, Peter responded immediately, although he was well aware of the Jewish law which forbade a Jew to fraternize with Gentiles.

The message which Peter brought to the centurion's household began (Acts 10:34, 35), "Of a truth I perceive that God is no respecter of persons: but in every nation he that feareth him, and worketh righteousness, is accepted with him." 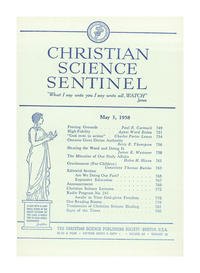