ARE WE WAITING FOR THE MOVING OF THE WATER?

By the side of a pool near the sheep market in Jerusalem, nearly twenty centuries ago, lay a man who had been helpless for thirty-eight years. He was waiting —waiting for the moving of the water in the pool. Why? Because he wanted to be healed. And he believed, along with the multitude of blind, lame, and maimed who waited with him, that he could be healed by the moving of the water. He believed that at a certain time an angel came down and troubled the water of the pool and that whosoever then first stepped into the water would be restored to health.

His waiting, however, was in vain. His bondage to materiality had brought him only misery and hopelessness, for when asked by Christ Jesus (John 5:6), "Wilt thou be made whole?" this man answered, "Sir, I have no man, when the water is troubled, to put me into the pool: but while I am coming, another steppeth down before me." 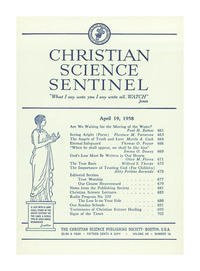