We read in the Bible that when Jesus was a child of twelve, he was found "in the temple, sitting in the midst of the doctors, both hearing them, and asking them questions" (Luke 2:46). In answer to his mother's questioning, he said, "Wist ye not that I must be about my Father's business?"

At an earlier time, Joseph, after he had been separated from parental guidance, rose from slavery to a position that permitted him not only to return good for evil to his brothers, but to save an entire nation from starvation. And when David was but a young man, he successfully demonstrated his God-given dominion by protecting his father's flock from a lion and a bear. 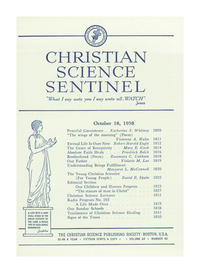