There is an old saying that "nothing succeeds like success." It is normal and natural to desire to succeed, to achieve an honest goal. No one wants to fail, and failure is never necessary. Mary Baker Eddy makes a very arresting statement in regard to achievement when she says in "Science and Health with Key to the Scriptures" (p.199): "The devotion of thought to an honest achievement makes the achievement possible. Exceptions only confirm this rule, proving that failure is occasioned by a too feeble faith."

When one is undertaking some worthwhile project or perhaps entering some new field of endeavor, it is always wise, first, to pray. We know that the greatest Teacher who ever walked this earth often retired from the multitudes to pray. Christ Jesus was so consciously aware of his unity with God and of the Father's loving care for all His children that the so-called aggressive mental suggestion of failure never entered his thought. As a consequence his achievements were great.

Send a comment to the editors
NEXT IN THIS ISSUE
Article
RESIST, INSIST, AND PERSIST 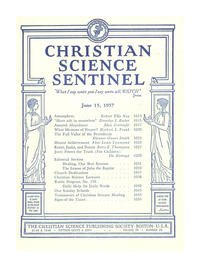