I desire to express my gratitude for the blessings I have received through the study of Christian Science over a period of nearly forty years. Christian Science was first presented to our family when my wife's mother was healed of invalidism through the work of a Christian Science practitioner. As a result of this healing, my wife and I secured Science and Health by Mrs. Eddy, and began to study it.

At this time I was having severe attacks of sciatic rheumatism, caused by a misplaced vertebra in my spine, the result of an accident. Both medical doctors and osteopaths had failed to afford me any relief. As I continued my study of Christian Science, these attacks became less frequent, and soon they disappeared altogether. I was also healed of a skin disease of many years' standing which had refused to yield to medical treatment.

Send a comment to the editors
NEXT IN THIS ISSUE
Testimony of Healing
"'Let there be light,' is the perpetual... 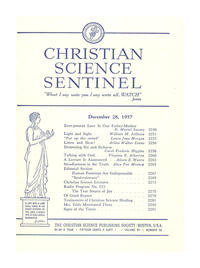