It is indeed a privilege to testily...

It is indeed a privilege to testily to the healing and regenerating power of Christian Science. The priceless privilege of Sunday School instruction, together with the early training I received from my mother, was my foundation in this religion. After going away from home to college, however, while I treasured the teachings of Christian Science, I failed to practice them. This went on for some years, a period in which I was a wanderer in the wilderness of materiality. I had been deluded into believing there was pleasure in worldly pursuits, such as drinking and smoking, and was fruitlessly searching for happiness in matter.

At last I found that only frustration, unhappiness, and weariness were the result. While still immersed in the bondage of sense, f became involved in a very serious business problem that completely overtaxed my human resources. At this time the angel thought came to me, "You haven't tried Christian Science to solve this problem." At once I determined to put down my heavy burden of false responsibility and seek God for direction and guidance.

Send a comment to the editors
NEXT IN THIS ISSUE
Testimony of Healing
I have great cause to express... 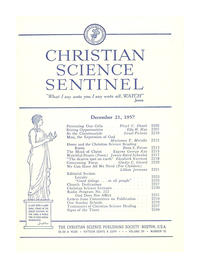