"How do you know there is a God?" is a question frequently asked in religious discussions. It is usually put by one who considers himself an atheist or an agnostic. A high school girl who attends a Christian Science Sunday School was thus challenged by a friend who was not a Scientist: "Give me just one scientific proof that God exists." By "scientific" the inquirer meant as measured by the standards of physical science; that is, he wanted material evidence of God's presence.

The reply was that God cannot be found in the realm of physical science, which deals with matter, because God is Spirit. Searching for God in matter would be as fruitless as looking for ornithological specimens at the bottom of the ocean. The physical scientist would be the first to admit that like produces like and that effect follows cause. 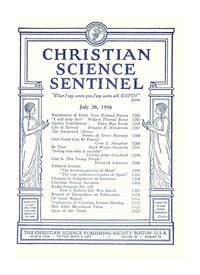