If by way of conversation someone asks us what comes to thought when the word "serve" is mentioned, we sometimes picture one who does menial service, or one required to do some unpleasant or difficult work which has been assigned to him. Frequently a feeling of compulsion, of submission to the will of a master, sometimes even bitterness about the kind of work required, seems to be associated with the word. If, however, we consider the word in the light of Christian Science, we no longer see in it these negative aspects.

In the Bible the words "serve" and "servant" are often used in connection with God and the worship of God. Some of the great Jewish leaders and kings, such as Moses, David, and Daniel, were servants of "the living God." Samuel, who had been dedicated as a boy to the service of the Lord, became a prophet and a judge. Through his humility, courage, and trust in God from childhood, David reached the heights of kingship. As we compare these individuals with one another, we realize that they all had certain qualities of character which constituted their greatness. First and foremost we find a sense of obedience. Each of those mentioned did what God required of him. 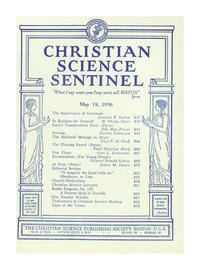