After joining the Auxiliary Territorial Service...

After joining the Auxiliary Territorial Service during the Second World War, I was taken ill with tuberculosis and sent to a military hospital. There I was told that my condition was very serious and that I would have to undergo medical observation. I asked a Christian Science practitioner for help and prayed to be shown what I needed to know to be free. On opening a Sentinel, I found my answer in these words quoted in the "Signs of the Times" column: "Do the truth you know and you shall learn the truth you need to know."

I was transferred by military command to four different hospitals. A major operation was unsuccessful, and when a second was suggested I asked if I might be released from the hospital. My request was refused, but I was allowed one month's leave, and I went to stay with a friend who was an earnest student of Christian Science. 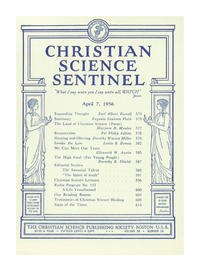