At Wednesday testimony meetings in Churches of Christ, Scientist, I have many times expressed my gratitude for a lifetime of benefits from the study and application of Christian Science. Now I should like to address such an acknowledgment to the wider audience that the columns of the Sentinel provide.

It was in the latter part of the 1880's that my aunt had a quick and decisive healing in Christian Science of chronic invalidism that had brought her to the brink of despair. Later she became a Christian Science practitioner in a large New England city, and she served many years in this healing work.

Send a comment to the editors
NEXT IN THIS ISSUE
Mrs. Eddy Mentioned Them
John Keats, 1795-1821 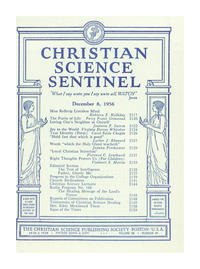