A few years ago my daily work...

A few years ago my daily work had to be done in such inharmonious circumstances that I felt most unhappy. All my spare time I gave to office work. At last I realized that our spiritual work has to come first, if we wish to be successful, and my difficulties were solved by my understanding of man's unity with God, our Father-Mother. Later on, other work was given me, more in line with Christian Science.

Yet I was not entirely satisfied, because I had hoped for promotion in my career. An experienced Christian Scientist, to whom I had spoken of this, wrote me, "True promotion is spiritual and consists of increased understanding, which will manifest itself in better work." Occasionally the thought presented itself: Why do I not get the promotion I want in that particular office work? Then one day I happened to go over the questionnaire for membership in The Mother Church. Suddenly it became clear to me that the particular work I had in mind was not in conformity with the requirements for such membership and therefore certainly should not be desired by a person who already had the privilege of being a member.

Send a comment to the editors
NEXT IN THIS ISSUE
Testimony of Healing
Wishing to share with others... 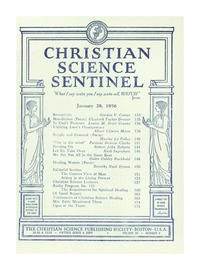