"THE CHARIOT-WHEELS OF TRUTH"

Most of us connect the thought of chariots with those used in ancient times. One dictionary definition of "chariot" reads thus: "A wheeled vehicle; as: among the ancients, a two-wheeled vehicle for war, racing, processions, etc." What use can such a vehicle have for us in this modern age of speed? Yet Mary Baker Eddy writes of chariots, chariot wheels, and chariot paths.

In studying the Lesson-Sermon in the Christian Science Quarterly one morning, the writer read with renewed interest the story in II Kings of the mountain filled with horses and chariots of fire which appeared to Elisha, when he prayed to God for help. It was the next reference, however, which held her attention (Ps. 68:17), "The chariots of God are twenty thousand, even thousands of angels: the Lord is among them, as in Sinai, in the holy place." 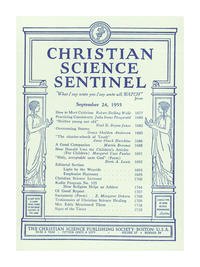