The kingdom of Judah experienced great prosperity during the reign of one of its kings, Uzziah. He occupied the throne at the age of sixteen, and the Bible informs us that he reigned for fifty-two years. For many years he proved himself a wise ruler. He was loved and honored by his people, of whom Isaiah was one.

As with all loyal, alert subjects, a deep individual sense of loss must have been felt by Isaiah when his king passed on. However, at this time Isaiah was enabled to perceive the divine revelation of the absolute rule of God, a vision which he later recorded in the following words (Isa. 6:1): "In the year that king Uzziah died I saw also the Lord sitting upon a throne, high and lifted up, and his train filled the temple." And he added, "Mine eyes have seen the King, the Lord of hosts." Isaiah had glimpsed something of the allness of God which in this age has been revealed to us by Mary Baker Eddy. She tells us in "the scientific statement of being" in "Science and Health with Key to the Scriptures" (p. 468), "All is infinite Mind and its infinite manifestation, for God is All-in-all." 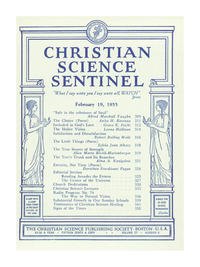