[Following is the text of the program of the above title released for broadcast the week end of December 16-18 in the radio series, "How Christian Science Heals," heard internationally over more than 800 stations. This is one of the weekly programs produced by the Christian Science Committee on Publication, 107 Falmouth Street, Boston 15, Massachusetts.]

RADIO PROGRAM No. 118 - A Great Discovery

On this program Mrs. Emily H. Samson of Winnipeg, Canada, told of her own experience. The program was as follows:

Speaker: These are dramatic times we live in because new discoveries are constantly being made in practically every field. Today we're going to talk about the greatest discovery of all—a discovery that you and I can share, a discovery which leads to full salvation from trouble. It's the discovery of who and what God is, and what it means to us to understand Him. Our guest today is going to give us an actual example. She'll tell us how she was healed of tuberculosis—healed when she learned more of God, when she discovered for herself the great fact that God never sends evil to His children. Now here is Mrs. Emily H. Samson of Winnipeg, Canada. Won't you tell us about it now?

Send a comment to the editors
NEXT IN THIS ISSUE
Testimony of Healing
"Offer unto God thanksgiving;... 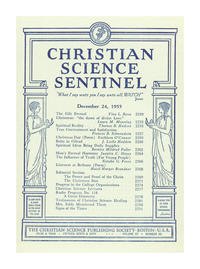