I wish to express grateful thanks...

I wish to express grateful thanks for the protective and healing power of Christian Science. As I was crossing a street to get into my car I was struck by a heavy lorry, which had just speeded from behind a bus that had had the lorry from my view. I was knocked down by the lorry, which passed over my foot, and a car behind it skidded into me while I lay on the street.

Instantly I made a declaration of the truth regarding man's spiritual relationship to God. Then I slowly repeated it and also "the scientific statement of being," on page 468 of Science and Health by Mrs. Eddy. Many other gems from our Leader's writings came to mind. The most prominent, I recollect, was her statement (ibid., p. 207): "There is but one primal cause. Therefore there can be no effect from any other cause, and there can be no reality in aught which does not proceed from this great and only cause."

Send a comment to the editors
NEXT IN THIS ISSUE
Testimony of Healing
In great humility I give praise... 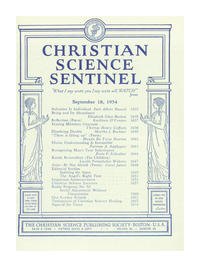