When I was quite young in...

When I was quite young in Christian Science, a woman asked me to care for her baby. Before going to her home I asked my ten-year-old son if he wished to go with me, as it was Saturday. He refused, saying that some boys wanted him to go roller skating with them. I was ready to leave with my little girl when I felt led to do protective work for the boy. This I did and then left, knowing that he was in God's care.

While I was bathing the baby who had been left in my charge, my son's name came to me so vividly that I knew something was happening to him. I immediately declared that I had left him in God's care and that nothing could harm him. Two more times his name came to me as though a voice had repeated it. The last time I vehemently said aloud, "He is in God's care, and nothing can harm him." Then I forgot about the incident.

Send a comment to the editors
NEXT IN THIS ISSUE
Testimony of Healing
For a number of years I searched... 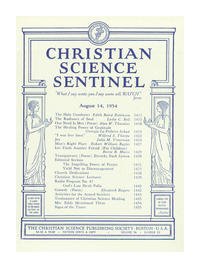