On page 340 of "Miscellaneous Writings" Mary Baker Eddy says: "The lives of great men and women are miracles of patience and perseverance. Every luminary in the constellation of human greatness, like the stars, comes out in the darkness to shine with the reflected light of God."

Our Leader had a deep appreciation of the good done by others and occasionally makes mention in her writings of an individual who has contributed something to the general welfare of mankind. With this issue of the Sentinel a new feature is introduced, entitled "Mrs. Eddy Mentioned Them." This page will appear each month in the second and fourth issues, and it is intended to bring to our readers, in a simple and readable way, short biographical sketches of some of the notable and interesting characters referred to by our Leader in her published writings. 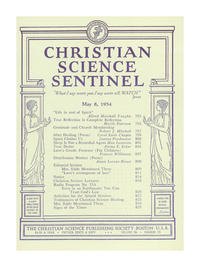