The first time the writer of this article read the Christian Science textbook, "Science and Health with Key to the Scriptures" by Mary Baker Eddy, it might almost have been written in an unknown language, so little of it did she understand and appreciate. However, having witnessed the beneficial effects of its sincere study on those who had introduced her to it, she embarked on a second reading, with much happier results. Light, though in limited measure, began to dawn on what had previously seemed hidden and obscure.

The grain of Truth which she had accepted and assimilated began at once to have its salutary effect in the healing of minor ailments and unattractive traits of character. Headaches and colds, which had occurred so frequently that they seemed to be a part of her being, faded out. Irritability, sensitiveness, and personal pride gradually gave place to calmness, peace, and unselfed love. 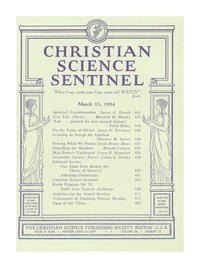