My mother was led to the study...

My mother was led to the study of Christian Science before I was born. As a result I have had the privilege of studying it all my life. I experienced healing through Christian Science of the results of a serious automobile accident. Although the cuts and bruises on my face were healed quickly, another effect of the accident was not overcome for a much longer time. This was a condition of the sight, called double vision. It was healed when I realized that there is only one God and one creation, the good creation of God's making.

Several relatives and I were informed that we had inherited a considerable amount of money and land. However, soon afterward we were told that a new will had been found which disinherited us entirely. This was very upsetting to me, and I called on a Christian Science practitioner for help. She helped me to see that what I really wanted was to let the truth be revealed and to be happy and satisfied with whatever was true and right. In a few weeks it was discovered that the new will was a forgery and that our rights were fully protected. A verse from the Bible was most helpful in this experience (Matt. 10:26), "Fear them not therefore: for there is nothing covered, that shall not be revealed; and hid, that shall not be known."

Send a comment to the editors
NEXT IN THIS ISSUE
Testimony of Healing
Because personal contagion, or... 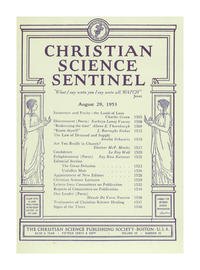