I first heard of Christian Science when living in England. Later I experienced a severe attack of influenza, followed by a mastoid abscess and a severe heart condition. The doctor was unable to relieve the pain and said I would be an invalid for the rest of my life.

In my extremity I wrote to a Christian Science practitioner. She answered my letter by saying that she was working for me and would come to see me, and she asked me to meet her at the railway station. I felt much annoyed at this, for I had taken many pages in my letter to tell her how ill I was, and I considered her most unsympathetic. On thinking the matter over, however, I realized that she would not ask me to do anything I was not able to do; so I went slowly to the railway station. On the way the pain left me, and by the time I arrived I was quite free. This was over twenty years ago, and since then there has been no trace of any of the troubles mentioned above. 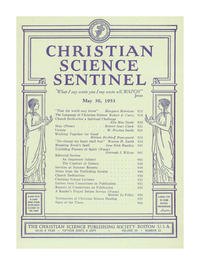